Discotheque, the amenities of Tourism

Sikles Trek; Your Next Journey

Read More
Home » 7 Photo Clicks that will amaze you!!

7 Photo Clicks that will amaze you!!

This is the blog about the photos I have clicked on trek and tours to different regions. The photos mentioned here are with the different illusion and definitely it will amaze you. Furthermore, I have provided the features and descriptions for each photos so that it will be easy  to read and understand.

Feature: You can’t see or recognize them until you increase the brightness of your device. This might be the amazing aspects of this picture.

Description: This is the picture taken at Baber Mahal Vilas. On the left side of the candles, you will see the photo of Rana Prime Minister Chandra Shumsher JBR and His wife Chandra Loka Bhakta Rajya Laxmi.

FYI, Field-Marshal Maharaja Sri Teen Chandra Shumsher Junga Bahadur Rana (8 July 1863 – 26 November 1929) was the fifth Prime Minister of Nepal from the Rana Dynasty. Although generally perceived as despotic and conservative, he is credited with several reforms including the abolition of slavery and Sati custom from Nepal.

A popular quote “चन्द्रे हाँस्यो त नास्यो” suggests that he seldom laughed and his laughter was rather an ominous one. TriChandra Campus, Tribhuwan Chandra Military Hospital, Chandra Jyoti Hydro Power at Pharping still bears his name as he established them.

Seto Bagh, a historical novel set on the early days of Chandra Shumsher, depicts him as an ambitious and cunning young man with an excellent command upon the English language.

Features: It looks like a bird flying below the blue sky and white clouds. But, this is not a real bird, it’s an art on the ceiling. You have to zoom and notice the white color of the bird to recognize as it’s a painting.

Description: This is the picture taken at Hotel River Side at Galeshwor Beni of Myagdi District. The design of the flying bird on the sky is used for the decoration of the ceiling at the hotel. This amazing concept is just unexpected enough to catch the eye without overshadowing the rest of your decor. This is the popular interior design on the ceiling of the house.

3. Flock of Pigeons at Bouddhanath Stupa

Features: This is the flock of Pigeons of Bouddhanath Stupa. You will find the pigeons at the day time.

Descriptions: This picture is taken at Bouddhanath Stupa in Kathmandu. You will find this spot on the northern side of Bouddhanath Stupa. You can also feed grains to the pigeons. You can see the flock of pigeons rest at the dome of Stupa.

For centuries, Bouddhanath has been an important place of pilgrimage and meditation for Tibetan Buddhists & local Nepalese. It is also a popular tourist site. In 1979, Bouddha became a UNESCO World Heritage Site. The Great Stupa of Bouddhanath is the focal point of the district. There are over 50 Tibetan Gompas (Monasteries & Nunneries) around Bouddhanath. As a daily ritual, many people walk three or more times around the stupa while repeating the mantra ‘Om Mani Padme Hum’ either quietly or aloud. Nowadays, the stupa is the most popular site for Buddhists in Nepal, and throughout the day pilgrims can be seen circumambulating the structure chanting mantras. It is especially spectacular at night when adorned with butter lamps. Remember to walk around the stupa in a clockwise direction and also to spin the prayer wheels clockwise.

4. Village in the lap of Himalayas

Features: If you ever had been at Ghandruk Village, your mind will bring out the memory and you may whisper it’s Ghandruk. It looks like the village of Ghandruk. Mt. Annapurna South and Hiunchuli Peak on the backside, cattle’s on the yard, green hills, a typical house, revives the memory of Ghandruk village and you might think, this is the pictures of Ghandruk Village. But it’s just a wall painting.

Description: These are the pictures taken at the Gokarna House restaurant of Thamel, Kathmandu. This looks like the scenery of Ghandruk Village. This is the wall painting that attracts anyone to see it clearly to find out where it is the photos of the village or it’s a painting.

Ghandruk is a village of Kaski district, situated at a distance of 32 km north-west to Pokhara. The village is readily accessible by public buses and private taxis. Ghandruk is a commonplace for treks in the Annapurna range of Nepal (Annapurna Base camp and Annapurna Circuit treks, in particular), with various trails and accommodation possibilities. The village hosts dramatic views of the mystic peaks of Mt Annapurna (7,219m), Mt Machhapuchhare (6,993m), Mt Gangapurna (7,455m) and Mt Hiunchuli (6,441m), and serves further as the gateway to the Poon hill trek thus placing it amongst the forefront of tourism attractions in the province. Gurung communities comprise the major inhabitants of the village.

Features: This might be the illusion pictures for you that it looks like a real image. Have you noticed the light effect? The sky is representing a night time but the light of other factors representing a day time.

Descriptions: This is the picture taken from the image of the cover page of the notebook. The scenario seems to be real. But the detailed information is still a subject of research. When you see this picture, you might think about where this place is and thinks about the beautiful scenario. To reach closer to the Glacial Lake, snow-capped mountain peak, it can be your dream, but it’s only an image I have found on the cover page of a notebook.

Features: This couples in this picture belongs to Sherpa Community. It looks like the people are there, but it’s a dummy. The costumes, ornaments, standing gestures, smiles, etc. makes it to be real.

Descriptions: This is the picture taken at Gorkha Museum, Gorkha Bazar. The costumes shown here is the traditional dress of Tibetan and Sherpa community especially they wear in Lhosar Festival. Such dummies are built up at Gorkha Museum to show the cultures, traditions, occupations of different ethnic groups like Gurung, Kumal, Bhujel, Sherpa, etc.

The museum is located at the lower palace of King Prithvi from where he expanded his kingdom. The main attraction of this museum is the beautiful artwork. There are two traditional cannons used by King Prithvi on either side of the main entrance. Things that were used in the king’s unification drive are placed from the second floor upwards. Souvenirs and inscription of old Nepal can be observed in this place. Traditional weapons used by our ancestors during the war such as cannon, spear, gun, and many more are showcased on the third floor. The fourth floor of the museum contains coins used by King Prithvi, which are completely different from the modern coins. Different utensils are placed on the fifth floor of the museum. The last room contains different musical instruments like madal, dholak, narsingha, and many more. These instruments were used by King Prithvi and his ancestors during festivals.

Features: The snow covered flat surface looks like a plain ground. But it’s a holy lake Gosainkunda at the elevation of 4,380 m. The lake melts to form the Trishuli River; it remains frozen for six months from October to June

Description: Gosainkunda is an alpine freshwater oligotrophic lake in Langtang National Park, located at an elevation of 4,380 m (14,370 ft). There are 108 lakes in the vicinity. Gosainkunda is Hindu and site where every year in August will be the special festival (holy thread festival) when a lot of Hindu people from different locations of Nepal visit to worship god Shiva. The Lauribina La pass at an elevation of 4,610 m (15,120 ft) is on its outskirts. The trek to Gosaikunda starts in Dhunche Village or Syabru Besi in the Langtang Himal, or Sundarijal in the Kathmandu Valley. When starting from Dhunche, the first day involves a long steady climb to reach Chandan Bari at an altitude of about 3,200 m (10,500 ft). Laurebinayak at about 3,700 m (12,100 ft) can be reached on the second day. At this point, some trekkers choose to climb ahead to Gosaikunda, though altitude sickness is a concern as the ascent is rather steep. Many trekkers choose to stay at Lauribinayak, which also provides sunset and sunrise views of the Langtang and Ganesh Himal.

Moreover, these photos carry the hidden features that are amazing after realizing. Either the places have the unique feature or the photos you clicked or shared might have the amazing feature that will bring illusion on you.

If you have any queries or need any support, please comment here. If you are planning to make your trip to Nepal, I shall be grateful to help you to organize your trip of Nepal. Please connect me via Whatsapp, +977-9860804860. 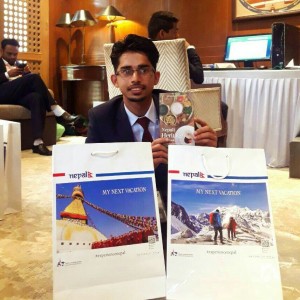 11 Adventure Activities You Can Do in Pokhara

Find us on Social Media!

Discotheque, the amenities of Tourism

Sikles Trek; Your Next Journey

Journey to the Himalayas

Wish you all the best on the auspicious occasion o

Swet Bhairab is a statue of Bhairava, avatar of Lo

Shree Antu is a small hillock situated on the foot

The pressure of survival in the big city will make

Mountain Lodges are waiting for you...❤️❤️

Make Sure you are healthy before you travel, durin

The Connection; Heart to Himalayas... 💓💓💓

The composition of Nature. Art By: @abhaya_khana

Janai Purnima, which falls in the month of August,

All of creation testifies to the Power and Presenc

Shrawan or Shravan month is devoted to worshipping

Checkout the blog on www.travelxlog.com from the l

Create your own visual style. Let it be unique for

This is the traditional method of Churning of Butt